Asmarina, a 2015 documentary by Alan Maglio and Medhin Paolos, follows what they call “voices and images of a postcolonial heritage.” This beautiful documentary (with an absolutely riveting soundtrack) tells the story of Milan’s habesha community, integral to the Porta Venezia neighborhood since the mid-twentieth century. Weaving together the experiences and identities of those who have lived in Italy for generations with those of newly arrived refugees, Asmarina traces the complex networks of colonial legacies, transnational migrations, family ties, and diasporic politics. And through these stories, which can only be understood from a spatially extended and transhistorical perspective, it also forces a serious reconsideration of what we mean when we talk about “Italy” and “Italians.”

Asmarina begins with a montage of photographs: a hand gently moving a magnifying glass over photo slides on a light table; an aging, black-and-white photo; a well-worn family album; crisp pages from the 1983 work of photojournalism Stranieri a Milano. Pictures are laid out on a table, ejected from a printer, displayed on the luminous screen of a smartphone. An haunting epigraph from Walter Benjamin (“There is a secret protocol between the generations of the past and that of our own. For we have been expected upon this earth.” opens the documentary, but while Benjamin may set the tone for the multigenerational story to follow, these photographs diverge from his grim vision of art in the age of mechanical reproduction. Asmarina’s evocative photos are not multiply removed from the everyday rituals of sensuous experience. Nor are they wrangled into submission with that infamous zoom-and-pan “Ken Burns effect,” which American film viewers have come to associate with the authoritative, masculineist tradition of documentaries about great men and their great wars.

In Maglio and Paolos’ documentary, photos are a form of collective praxis, deeply embedded in social relations and indeed formative of social relations. Photos—family photos, photojournalism, candid snapshots—are the material by which kinships and connections are traced among people, places, and time; they allow for the transmission of embodied knowledges and histories. (In one memorable scene, a young boy repeatedly asks his mother and grandmother to identify the relatives in a series of photographs; in loving exasperation, the mother responds, “Son’ tutti zii, amore!”). Photos, then, are one of the archives by which diasporic connections are established, remembered, and longed for. 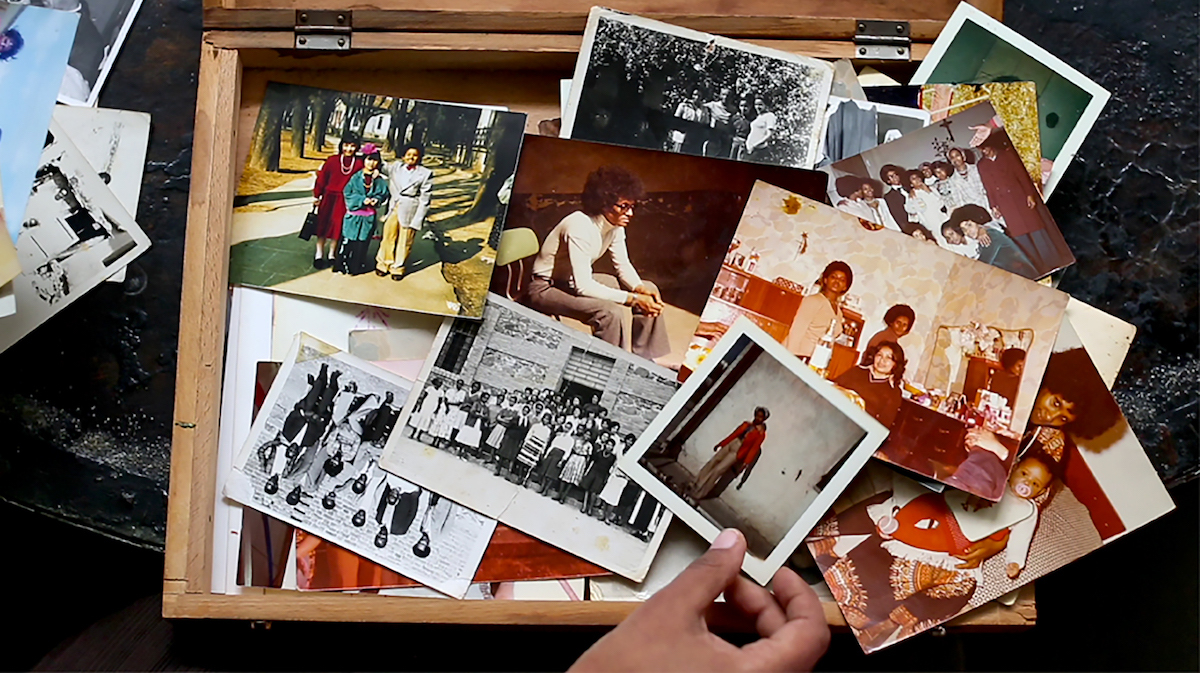 Historian and scholar of the African Diaspora Tina Campt, who has written extensively on the experiences of Black Germans, writes in a 2009 Social Text essay that “family portraits and snapshots function as a complex site of black European diasporic formation”:

The African diaspora is both an imaginative and compelling formation to which black people look when envisioning their diverse histories and cultures. Yet the contemporary vicissitudes of transnational black community relations often make it difficult to discern exactly how we “see” race in diaspora — and diasporic blackness, in particular — and to untangle our implicit understandings of what constitutes membership and belonging therein…Seeing our- selves, or “picturing us” (to borrow Deborah Willis’s elegant phrasing), is a necessarily defamiliarizing practice that reflects the fundamental and constitutive dynamic of diaspora itself.

Diaspora is not a given, Campt reminds us; it is something that is actively made. And indeed, much of Asmarina is about how a multigenerational black diasporic community forms, survives, and even thrives when the exclusionary logics of Fortress Europe would have one believe that it should not exist in the first place. The power of this move cannot be overstated at a moment in Europe when blackness has come to be synonymous with death—whether activists on the left are invoking images of black refugees drowning in the Mediterranean, or right-wing xenophobes are implying that an “encroaching” blackness marks the impending death of a racially pure Europe that never actually existed. These family photos, their circulation, and the loving ways in which they are cared for by members of Milan’s Eritrean community represent everyday acts of black resilience, survival, and even resistance. 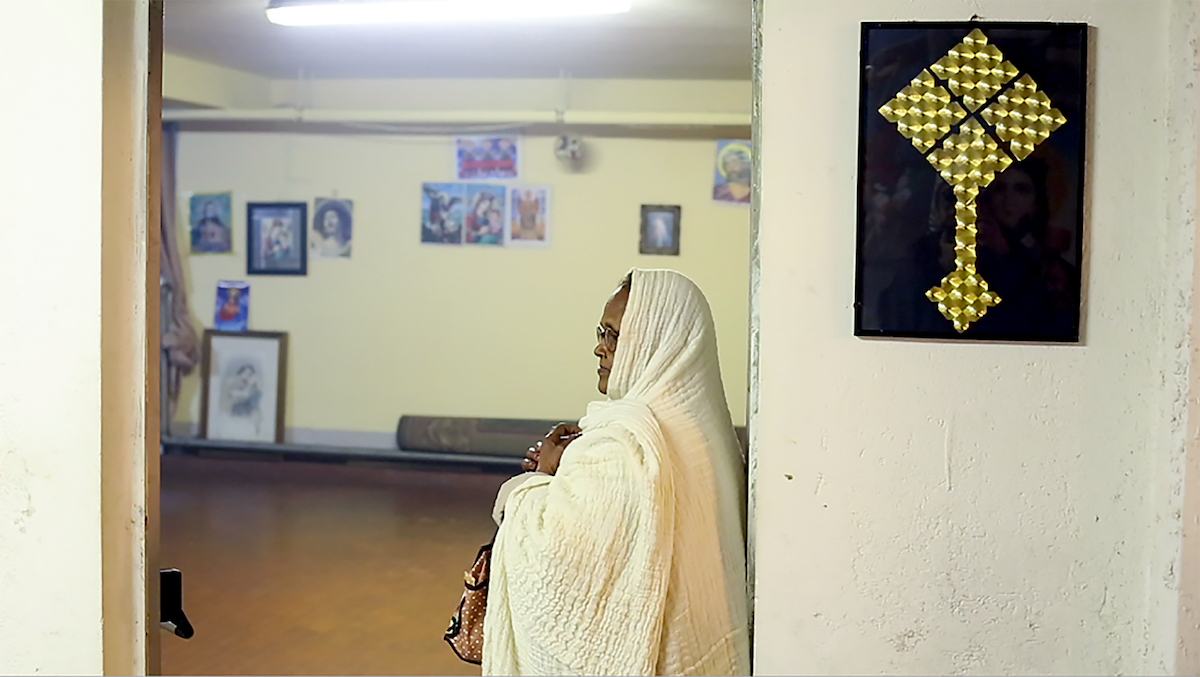 Asmarina is not a linear documentary. One could start the story as Franco De’ Molinari does in the film, with the acquisition of Assab in 1869, and proceed to tell a straightforward tale of progressive Italian control over the Horn of Africa, a chain reaction that culminates in the ongoing Mediterranean refugee crisis. The film does not deny these connections—indeed, its central thrust is the necessity of linking past and present, of connecting a history that remains largely unacknowledged with a contemporary reality that would not be so surprising if we started our stories with the brutal reality of Italian colonialism. By opening with family photos and subsequently moving back and forth in time through the space of memory, Asmarina suggests that more than anything, the past is a tool. It is a powerful and potentially transgressive weapon that we can only apprehend from the vantage point of our present circumstances. Or, as Haitian anthropologist Michel-Rolph Trouillot wrote in Silencing the Past, “The past does not exist independently from the present…The past is a position.”

Because of the centrality of photographs in Asmarina, it is easy to overlook the repeated appearance of maps throughout the documentary. There is the aerial view of Asmara on a serving tray at an Eritrean restaurant in Porta Venezia, an atlas of the Horn of Africa, and an assortment of faded, sepia-toned colonial maps. But there are also the lived maps, the diasporic countergeographies of Milan that reveal what the late feminist geographer Doreen Massey called an “extroverted sense of place” or what geographer Heather Merrill, when writing about Black Italian lifeworlds, calls “relational place”. Far too often, documentary projects purport to “shed light on the hidden world of immigration in Italy,” as though migrants and their children are not already rendered hypervisible daily through policing, surveillance, Fanonian relations of epidermalization, and compounding moral panics. This sort of documentary approach has the effect of bounding blackness as something foreign to Italy (though the category of the extracomunitario, as one woman in the film remarks)—an utterly inscrutable contaminant that must be brought to the light of day and cleansed with the disinfectant of sunlight.

Asmarina is not a “shedding light” documentary. It’s not a documentary about immigration, either. Maglio and Paolos upend the normative temporalities and geographies of migration with the story of writer Erminia Dell’Oro, an Italian born and raised in Eritrea who is amusingly described as a seconda generazione al contrario. At a screening of the film at Rome’s Palladium theater in March, Paolos remarked that this was not just a story about Ethiopians and Eritreans—it was intended to be a story about Milan. And this is imminently clear from the way that the camera lingers lovingly over shots of Porta Venezia at dusk, or the mysterious caverns of the metropolitana. Asmarina is not about the “hidden Milan,” it is Milan. And Bologna. And Italy. 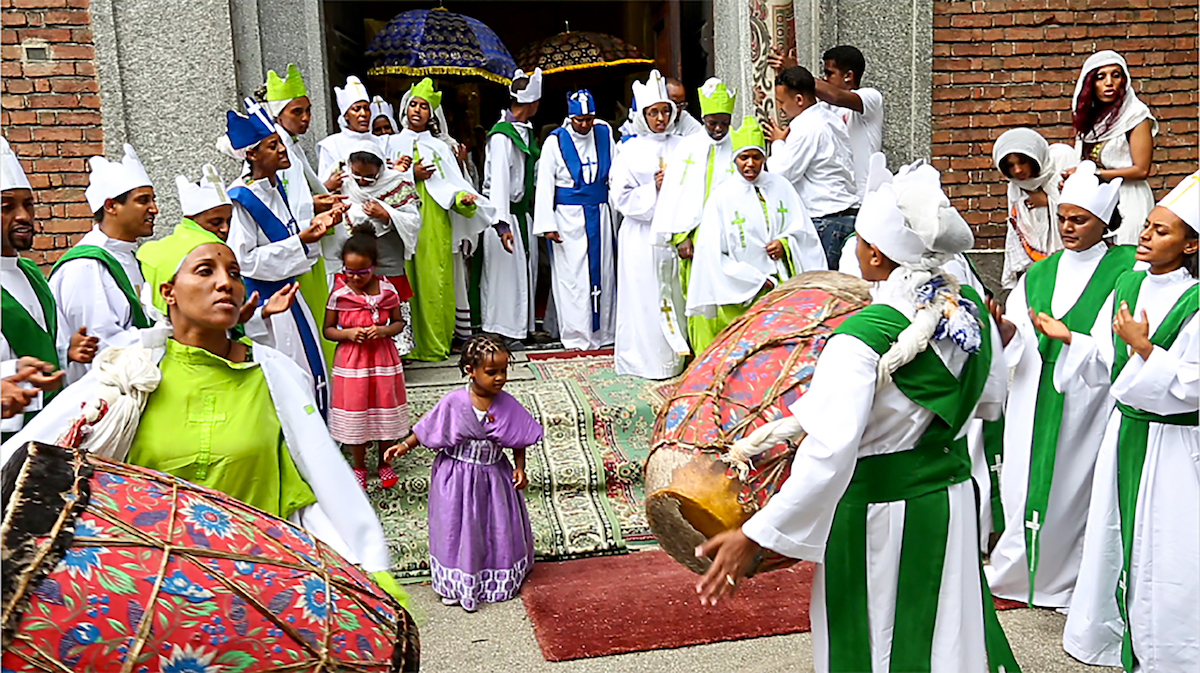 In a sentence, Elena summarizes a simple yet powerful fact: Italy and Eritrea produced one another. But, she goes on to explain, this was a profoundly uneven relation of exchange—it was not something da esaltare. The ties linking Italy and Eritrea, while dense and layered, do not paint a convivial picture of innocent interracial love and selfless acts of bridge- and school-building (as much as Italians, when they do acknowledge their country’s colonial history, would like to assume that it was benign and even charitable). Italy and Eritrea are connected in a relation of power, the product of a colonial order of unevenly-distributed mobility: Italians in Eritrea who spoke Tigrinya were fully accepted as Eritreans, she notes, but Eritreans in Italy today are still seen as foreigners, even when they have resided here for generations and speak an Italian that is indistinguishable from their white counterparts.

But Eritreans were also producing their nation in diaspora from Italy. The Bologna Eritrean Festivals, documented in Asmarina, were a key site in the struggle for liberation that brought together diasporans not just from Italy, but from around Europe and the rest of the world. After all, as anthropologist Victoria Bernal notes, at the time of Eritrean independence one in three Eritreans (about one million people) actually lived outside the country—so it has always been an extraterritorial “nation as network.”. This powerful, co-productive relationship between Italy and Eritrea challenges the idea of bounded space, of nations as hermetically sealed units, that has proved so deadly in our modern world. 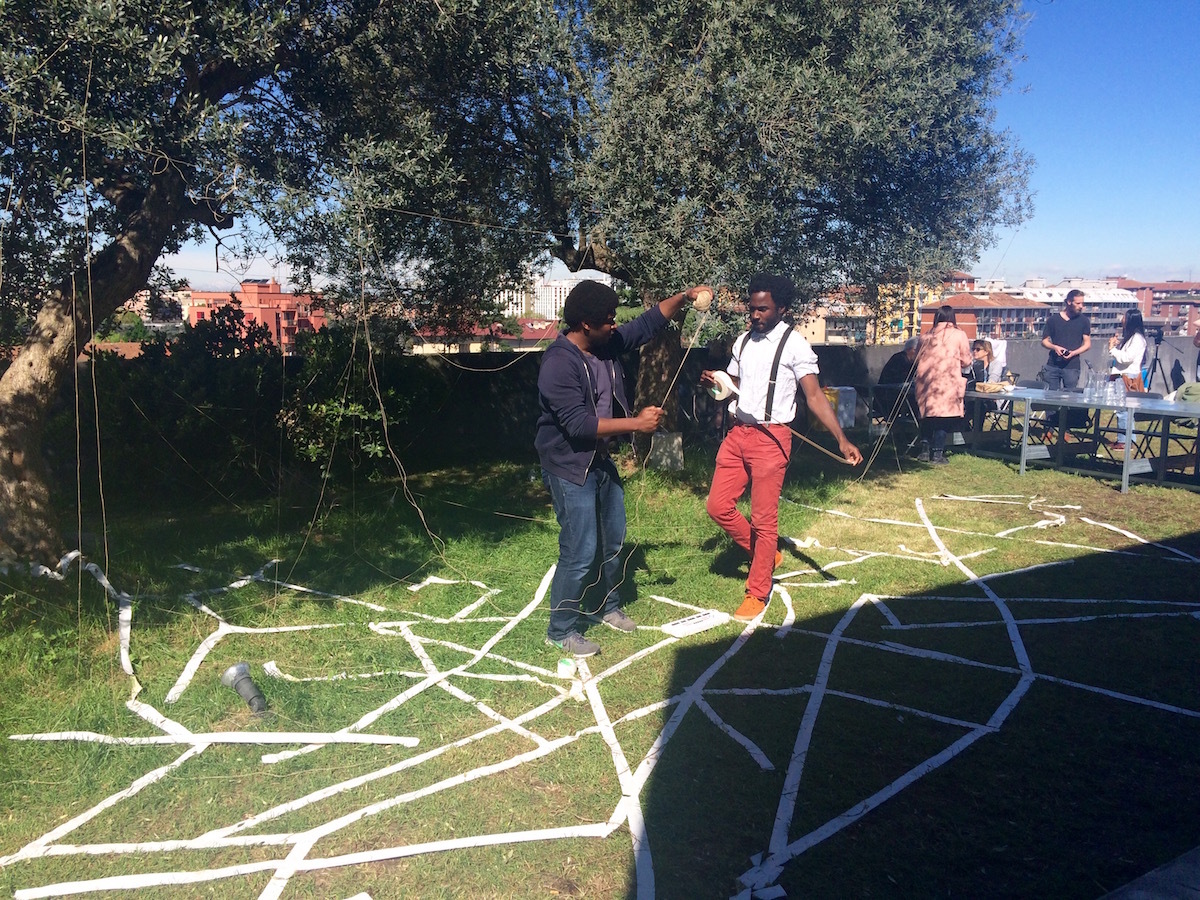 Quinsy Gario (left) and Jörgen Gario (right) performing on the third day of “Treaties and Gifts of Shifting Wills.”

Into the postcolonial present

Asmarina’s characters frequently acknowledge the lack of an open discussion about Italian colonialism despite its aggressive deployment of chemical weapons and apartheid strategies of special segregation. Only in the last fifteen years or so have scholars begun to engage in a sustained, comprehensive, and critical manner with Italy’s colonial past (public awareness, however, continues to lag). This is due to both new access to colonial archives and to Italy’s transformation in the late twentieth century into a site of postcolonial migrations from across the African continent, the latter of which demand a serious engagement with the direct and indirect legacies of colonialism. But how are we to make sense of this colonial history as something other than an abstraction? Asmarina provides one answer: through lived, embodied experience; through memory.

Another suggestion came from an unexpected place—2016 Salone del Mobile in Milan, in the interactive performance–installation “Treaties and Gifts of Shifting Wills.” During the weeklong design festival, Dutch–Caribbean artist and activist Quinsy Gario (famous for his activism against Zwarte Piet and his brother, the musician and poet Jörgen Gario, enacted a series of short but emotionally wrenching performances about the Treaty of Wuchale. This 1889 document, signed between Abyssinia and Italy, eventually led to the first Italo-Ethiopian War, Italy’s defeat at Adwa (the first African anti-imperialist victory) and the vengeful reinvasion by Mussolini’s forces in 1935.

Over six days in the abandoned, modernist loft of a deceased architect on Via Ventura, the Garios slowly built a monument to the violence of Italian colonialism. After a solemn reading of the treaty by Quinsy set to Jörgen’s synthesizer music, the brothers gradually added lines of white tape to the grass below their feet and strung twine from the olive trees above their heads. To the viewer, this immediately recalled the proliferation of walls and borders and fences around the world. And like Asli Haddas in Asmarina, Quinsy notes that Italy engaged in apartheid long before South Africa. Indeed, Italy was part of the imperial scramble along with the rest of Europe and was therefore complicit in the formation of a colonial, sociospatial racial order that was the condition of possibility for Fortress Europe—for the consolidation of an “us” that necessarily precludes a “them.” As Quinsy and Jörgen retraced their performance daily, each line in the grass and strand of twine in the trees became a living, expanding archive of grief, pain, anger, and righteous indignation. But just like the Eritreans in Asmarina whose memories allow their community to both look to the past and imagine a different future, there is also struggle in these archives, and there is hope. Or, as Quinsy put it, against the backdrop of his brother’s soulful singing, “I will align myself with an ‘us’ that believes that this ‘us’ is necessary for the future.”

With the support of

Angela Davis about Asmarina in Rome